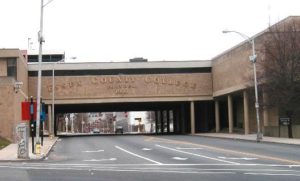 Essex County College, an institution that has overcome daunting problems in the past, now faces the worst crisis in its 50-year history—the possible loss of its accreditation and, with it, its ability to operate as a public, degree-granting institution.

The two-year community college faced an accreditation crisis once before—more than 30 years ago—but, this time, the school cannot rely on intervention by state officials as it did in the late 1970s to end corruption and political interference. State supervision of public higher education was ended to save money under former Republican Gov. Christie Whitman in 1994.

“What’s going on now is just sad and disappointing,’’ says A. Zachary Yamba, who served more than 30 years as the school’s president. “It puts the institution at risk of closing.”

Another former leader of the college, Bishop Reginald T. Jackson, its former trustee chairman, declared “what’s happening at the college is absolutely vulgar,” and added he believed only dramatic action by the regional accrediting agency, the Middle States Commission on Higher Education, could save it.

“The college is in great jeopardy of closing,” says Bishop Jackson, who served 13 years on the trustee board and now serves as presiding bishop over more than 500 African Methodist Episcopal (AME)  churches in Georgia.

Yamba suggested that, if problems at the college could not be solved internally and the college loses its accreditation, surrounding public institutions in Newark–like Rutgers and the New Jersey Institute of Technology (NJIT)–could provide an “umbrella” administration until full independence could be restored.

“While it’s rare to close a public college, some have had their governance changed–perhaps become part of other institutions,” he said.

In 1979, the threat by Middle States to strip the college of its accreditation led to the state intervention that removed all trustee board members and opened the way for Yamba’s appointment. Yamba, who had been a faculty member and administrator at the college, acted quickly and effectively after his elevation to president to save the school’s accreditation—and its state license to award degrees.

Yamba retired in 2010 but returned as an interim president for a year when the college slipped into chaos. It has had three presidents in seven years and faces a budget shortfall. Its ability to award financial aid has been threatened by the federal government.

Middle States has demanded a response to its earlier findings that Essex had failed to meet accreditation standards. The agency acted “to warn the institution that its accreditation may be in jeopardy because of insufficient evidence that the institution is currently in compliance with” standards governing resources, leadership, governance, and student admission and retention.

That response is due Friday and the accrediting agency will then return for another inspection visit.

Although the list of problems plaguing the college is long, Yamba says he believes the failure of the trustees to support the efforts of its most recently appointed president,  Anthony Munroe, to meet Middle States’ demands is the greatest threat to the college’s future.  For example, the trustees recently rejected Munroe’s efforts to hire a chief financial officer for the college—a key demand of Middle States.

With no state supervision, politics rules

Both Yamba and Jackson—along with other religious and political leaders—blame what they call “political interference” for the chaos at the college. The problems apparently center around the close relationship of trustees and at least one top administrator to Joseph DiVincenzo, the Essex County Executive and, despite his Democratic Party affiliation, a close ally of Republican Gov.  Chris Christie. DiVincenzo appoints all but two of the trustees—the governor appoints two.

“They cover for each other,” Bishop Jackson said of the close alliance between Christie and DiVincenzo. “The state won’t help.”

A key problem is the role played by DiVincenzo ally Joyce Harley, who once served as county administrator and now is a financial officer at Essex. Harley, for example, admitted she played a role in blocking the  effort by Munroe to hire a chief financial officer.  In a memorandum to trustees, she contended Munroe failed to follow procedure in the appointment—an odd action by an administrator who ranks well below the president.

The threat to the future of Essex has led other groups and political figures to speak out. A letter from a group called “Faith Leaders of Essex County” criticized the move to block Munroe’s administrative appointments as “political interference.”  The religious leaders accused county political leaders of “political shenanigans” that were “designed to destabilize this President.”

The members of the clergy have scheduled a rally and press conference Thursday at 3:30 pm outside the college to demand a “forensic audit” of the school and a “cessation of political influence and interference.”

Meanwhile, the president of the county’s freeholder board, Britnee Timberlake, also citing the effort to frustrate Munroe’s appointment, warned the trustee board that the failure of Essex to maintain its accreditation would be a “travesty and social abomination.”

Timberlake was careful to point out the elected freeholder board “does not govern the college,” but she said the county legislators “have received numerous complaints, letters of concern, and grievances from citizens.” She gave the trustees until Tuesday to answer the issues raised by the letters from the religious figures.