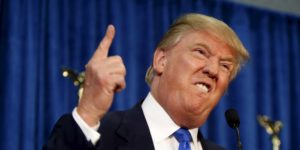 Editor’s Note: In the spring of 2016, James Fallows, the senior editor of The Atlantic Monthly magazine, began what he called a series of “time capsules” that could, in the future, provide a key as to what Americans were thinking during the election campaign–as Trump began his march to the presidency. He finished with 152 of the “time capsules” just before the vote. This site will publish one of the capsules every week or so and that should bring us to the doorstep of the 2020 election.

What follows is the third  “time capsule.” All the material shown, except my introduction, is copyrighted by The Atlantic Monthly and there is no intention here to claim editorial credit for any of it. If you wish to read the entire series in one sitting, go to http://www.theatlantic.com/notes/all/2016/05/the-daily-trump/484064/

Temperament, temperament, temperament. Every politician feels this way, and you can imagine Nixon or LBJ fuming this way to their confidants. Bill Clinton too. But the judgment to vent this way directly to millions of followers? Again, it’s Tosh.0. No larger point for now, just recording some of the tally as it mounts up.