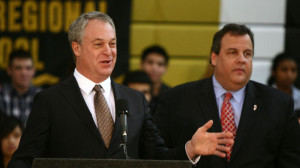 (Editor’s Note: I was unable to attend Wednesday’s meeting of the state school board and asked Melissa Katz, a well-known student activist and supporter of public education, to cover the meeting for me. Her report is complete and comprehensive and will give the most thorough  account of what happened at the meeting I have yet seen).

The controversial deal cut between New Jersey Gov. Chris Christie and Newark Mayor Ras Baraka bore its first fruit Wednesday when the state school board voted 6-4 to name former state education commissioner Christopher Cerf to take over as the state-appointed superintendent of Newark schools. All six board members voting for Cerf, a national proponent of charter schools and a business entrepreneur, were appointed by Christie; those voting against Cerf were holdovers from previous administrations. No public comment was allowed at the meeting.

Cerf’s nomination had been opposed by the Newark groups that successfully drove out Cami Anderson as state-appointed superintendent after her four years of contentious, incompetent and, at times, tragic rule.  Just the day before, more than one hundred protesters rallied in Newark against the Cerf appointment. All speakers but one–Baraka himself–called for a rejection of Cerf’s appointment. Baraka, clearly angry at those–like this writer–who opposed his deal with Christie–would not criticize the former education commissioner who originally hired Anderson.

What follows is a comprehensive account of Wednesday’s board meeting written by Melissa Katz, a junior at The College of New Jersey, an aspiring urban teacher, and a student activist who has consistently supported the aspirations of Newark residents to run their own schools after 20 years of state rule:

In what is usually a regular, monthly meeting at the State Board of Education, the tension in the room could be felt. Less than 24 hours earlier, over 100 people stood on the steps of Newark City Hall, protesting the proposed appointment of Christopher Cerf as the new Superintendent of Newark Public Schools. Equally as many if not more phone calls and emails were made to the State Board President Mark Biedron with the same message: the community of Newark was saying ‘no’ to Chris Cerf.

This morning, that proposal became a reality.

In a 6-4 vote by the State Board of Education, Cerf was appointed as the next — and according to State Board President Mark Biedron and current Education Commissioner David Hespe, “next and likely last” — state-appointed superintendent for Newark.

Cerf, though, was nowhere in sight.

Hespe started the discussion with long, detailed opening remarks about the state of Newark schools. He stated, in full, the following:

HESPE ON CERF:”The education reforms under way in Newark must continue.”

“We are 20 years into the state operation of the Newark district and we’re at a very, in my mind, crucial period in time in our work with the community of Newark. Two weeks ago, I announced the departure of Cami Anderson as State Superintendent. We recognized her hard work on behalf of the children and people of Newark, and I truly believe that Newark Public Schools have made tremendous strides over past years under a number of series of innovative reforms and the earnest leadership of not only the district staff and the State Board, but also local educators who have I think made a difference. The focus we should always remember is on how our vision for Newark schools will advance the best interest of children in Newark — and that’s why whatever we do moving forward, the education reforms under way in Newark must continue and we must work with all folks in Newark: all parents, all educators, all community leaders to make certain that as we focus on providing parents with greater educational opportunities, improving instruction, and developing innovative programs and establishing best practices in the classroom, that they continue; but with the knowledge that all of these initiatives are dynamic in nature, they will be constantly be improved, constantly be changed, and sustained, and intensified.

“With that said, I think, I strongly – and I know its shared by board members – support the involvement of the community in educational decision making, and I know that’s a key component of success of any school improvement initiative. It not only serves to bolster the commitment to make the hard decisions that are required over time to sustain these initiatives, but also help these initiatives be successful. Often, however, we see the tension between state operation in terms of developing and implementing a bold educational improvement agenda, and local control in terms of community engagement and buy-in. These tensions create a challenge that can and must be resolved if the children of Newark are to continue to see the fruits of these reform initiatives, and the people of Newark are to see the economic and standard of living improvements that come with a skilled and educated workforce. That’s why I was so pleased that the Mayor of Newark and the Governor of New Jersey came together to establish a shared vision for empowering the people of Newark to make decisions over their schools while sustaining and growing a culture of high educational expectations, accountability, and results in the City. This included the creation of the Newark Educational Success Board that will be charged with developing a clear, specific pathway with appropriate timelines and benchmarks for return of local control to the Newark community. The panel will also examine the issue of capacity building at a district and school level with government, community, and neighborhood groups to ensure that the problems that led to state takeover of the schools never reoccur and decision making focuses always on what is in the best interest of children. Communication we know will continue to be key, and we must communicate fully and effectively to students and parents in the community throughout this pending transitional process.

HESPE ON CERF:  “He has the integrity to focus on doing what is right for the children of Newark, he has the strength to stand up to any corporate interests.”

“I also announced that Chris Cerf would be recommended to the State Board of Education as the next and likely last state superintendent for the Newark School district. I wholeheartedly endorse him to fulfill this unique roll. He has the integrity to focus on doing what is right for the children of Newark, he has the strength to stand up to any corporate interests, he has the organizational experience to manage this larger, dynamic change process, he’s innovative, and a true problem-solver. He understands the Newark public schools and initiatives, as well as the community. He has the ability to work with the charter school sector. In short, he is uniquely qualified to assume this role and hit the ground running quickly and effectively. I was here 20 years ago when the state board of education voted to takeover the Newark Public Schools and appoint a state superintendent. Truly, I believe we are presented with great opportunity to only build on the progress, which I know firsthand over those 20 years is often slow, and often painful, that was made over each minute of that 20 year period, to foster the improvement of lives of school children throughout the district which we set out to accomplish many years ago. We must also recognize that this path has great opportunity for improving it [scuffles] but it’s also fraught with danger: danger of allowing the problems that led to state takeover in the first place to return; danger of distracting us from our singular goal of making children’s’ lives better.

“We need strength, we need wisdom, we need integrity, we need compassion, and we need commitment to doing what is in the best interest of the children of Newark. For those reasons, I urge you to approve the nomination of Chris Cerf as the next state operated superintendent.”

The resolution was then read, and board members, one by one, made comments and casted their votes.

Reaction from the audience included:

Donna Jackson, parent activist in Newark, had the following to say about the appointment: “This is a slap in the face of every child in the city of Newark. The vote today just told every child in Newark that we care more about contracts, getting our friends jobs, closing down schools, and falsifying data, than seeing that their future is bright. I think the elected officials that represent Newark that agreed to this tragedy should all take a deep look inside themselves to see if they really can say they care about the children in the city of Newark. The request of Mr. Aponte should’ve been honored enforced and voted on today. We have another three years of hell in Newark, and believe me, the fight and protests will continue. We will not be quiet, we will not sit still. No, we will organize; we will continue to push back. We will run Cerf out of Newark as well.”

Donald G Jackson Jr., school board member in Newark. He said: “They have drawn a line in the sand. We know where they stand. The New Jersey State Board needs to get a grip on reality — they can’t talk about local budgets and talk about how money is spent and let Cami [Anderson] spend money in wasteful ways on salaries and failed reforms. I am very disappointed, but not surprised. At the end of the day, if it weren’t a poor black and Latino district we wouldn’t have this issue in the first place.”

Melissa Katz is a junior at The College of New Jersey in the Integrated Bachelor’s and Master of Arts in Teaching in Urban Elementary Education program with a double major in Women’s and Gender Studies.