Gov. Chris Christie is the most remarkable political talent America has seen since Bill Clinton. If you haven’t witnessed his performance at a town hall meeting yet, make a point of it. You will come away convinced there is a sensible middle ground in America after all.

Equally impressive is his skill at playing Trenton’s inside game. Faced with Democrats in solid control of the Legislature, he’s managed to split them down the middle by seducing a handful of pliant party bosses whose self-interest compelled them to hitch their wagons to his.

The surprise is that his achievements have been only modest. He signed an important reform to contain pension and health costs, but it was mostly done before he arrived. He signed a useful tenure reform last year, but it is a weak version that still protects bad teachers with seniority. His reorganization of the higher education system is promising, but untested.

Balance that against his measurable failures, and you have to conclude he is much better at politics than he is at governing.

The property tax burden has grown sharply on his watch. He is hostile to low-income families, raising their tax burden and sabotaging efforts to build affordable housing. He’s been a catastrophe on the environment, draining $1 billion from clean energy funds and calling a cease-fire in the state’s fight against climate change.

The governor’s claim to have fixed the state’s budget is fraudulent. New Jersey’s credit rating has dropped during his term, reflecting Wall Street’s judgment that he has dug the hole even deeper. He has no plan to finance transit projects and open space purchases now that he has nearly drained the dedicated funds he inherited from Gov. Jon Corzine.

His ego is entertaining, but it’s done damage as well. By removing two qualified justices from the Supreme Court without good cause, he threatened the independence of judges at all levels, and provoked a partisan stalemate that has left two vacant seats on the high court. This was a power grab gone wrong.

The public gives him top marks for his handling of Sandy, but the record is mixed. Why would his administration park NJ Transit trains in a low-lying area where they flooded, causing $120 million in damage? Why did the federal government have to strong-arm the state to include more relief for renters and Spanish-speakers than Christie had proposed? And why should anyone believe taxpayers got the best price on refuse removal when the governor awarded a no-bid contract through a political friend?

Our own view is that Christie is overrated. His spin is way ahead of his substance.

Why then, are we endorsing him for a second term? Because his challenger, state Sen. Barbara Buono, is a deeply flawed candidate.

Begin with education. Buono’s close alliance with the teachers union is a threat to the progress Christie is making in cities such as Newark and Camden. She is hostile to charter schools, which now educate nearly 1 in 4 kids in Newark.

An authoritative national study showed that students in the charters are learning more, which explains why 10,000 Newark families are on waiting lists. Yet Buono cannot bring herself to acknowledge that the charters have helped. She sponsored a bill that would basically slam the brakes on new charters by requiring voter approval of each one. She is making a status quo argument in the face of persistent failure.

Buono opposes the Newark teacher contract, which freezes the pay of the worst teachers and grants bonuses to the best. She wants a traditional union deal, in which no distinction is made. She would return control of the schools to Newark, which would spell the end of Superintendent Cami Anderson’s promising stewardship.

The endorsement of Christie comes with the hope that Democrats hold control of the Legislature to contain his conservative instincts.

Understand that President Obama endorses the reforms Christie has pushed. This is not a right-wing conspiracy; it is a bipartisan movement that’s based on promising results for disadvantaged kids. Buono would stand in the way.

Her alliance with the unions would also threaten progress made in containing the cost of public workers. She voted against the pension and health care reform, and supports the practice of allowing public workers to accumulate pay for unused sick days. She would cap the total at $7,500, but even that reveals a mindset that is discouraging.

Another big concern: Buono lacks the strategic savvy to be a successful governor. She commands little respect among fellow Democrats, who have abandoned her in droves, with nearly 50 elected officials endorsing Christie. She is a loner in the Senate who derides political bargains as “back-room deals.”

She picked a pointless fight in June by choosing a party chairman who was vehemently opposed by most Democratic leaders, and she was then forced into an embarrassing retreat. Her choice as lieutenant governor is a little-known union leader with no experience in elected office, and a spotty voting record.

Down in the polls by 30 percentage points early in this race, Buono has made no adjustments. She is openly disdainful of party bosses like George Norcross, but lacks any plan to govern without them.

Her critique of Christie centers on property taxes and jobs, but she lacks a convincing strategy to do any better herself. She has a long list of expensive plans, from universal preschool to more aid for public colleges. But she can’t name a single spending cut beyond the traditional promise to attack “fraud and abuse.”

If this is the end for Buono, remember that she didn’t lose this on her own: The Democratic Party punted on this race. 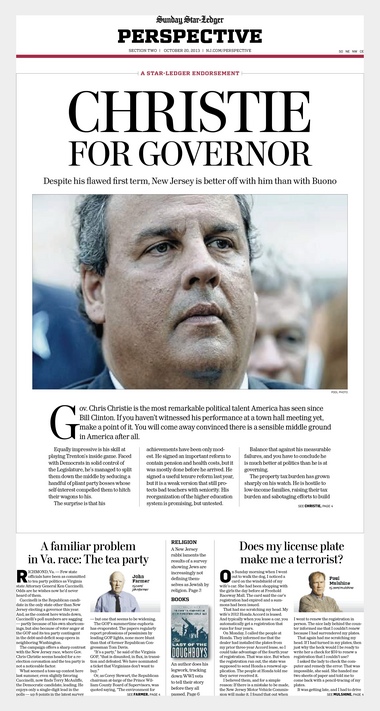 Its major players were scared to challenge Christie, and only Buono showed the conviction to stand up to him. If anyone should be ashamed in the wake of the crushing defeat the polls predict, it is the lethargic and compromised party establishment, not the lone woman who took up the challenge.

Buono has long been a sturdy voice for progressive causes. She was a key player in establishing paid family leave, protections against bullying and revamping the school aid formula.

As governor, she would allow gay couples to marry, raise the minimum wage and stop the baseless attacks on the courts. She would raise taxes on incomes greater than $1 million, and restore at least some of the property tax rebates that Christie cut. She would also restore funding for Planned Parenthood, and sign strong gun legislation. On each of those issues, we are with her.

But our endorsement goes to Christie, despite the deep reservations. He has refused to speak with The Star-Ledger editorial board for four years, the first governor in either party to do so. But we are shaking off that insult because our duty is to the readers, and our goal is to help them decide which button to push. In her editorial board meeting, Buono simply did not make the case.

The endorsement of Christie comes with the hope that Democrats hold control of the Legislature to contain his conservative instincts. It is especially important that Democrats hold the Senate to block him from remaking the Supreme Court in his image, a move that would doom urban schools and affordable housing efforts.

Christie has said little about his plans for a second term. Our fear is that he could veer rightward to impress Republican base voters in the 2016 primaries, by reviving his plan to cut income taxes for the rich, by escalating his campaign to strong-arm the Supreme Court, or by picking a fresh fight with the unions. Our hope is that he sticks to a bipartisan agenda, and we’d suggest he start by addressing his biggest failure: the rising burden of property taxes.

As for Buono, we can offer only this consolation: She had an impressive run in the Legislature, and deserves praise for being the only Democrat with the moxie to step in front of this train.