New Jersey is paying nearly $100,000 to  a Utah company to go through hundreds of thousands of social media postings to determine whether children are revealing anything about the PARCC tests. The company, Caveon Test Security, is a subcontractor to Pearson, the  British-based publishing company.

Caveon will not, however, reveal how it links what it finds to specific students–like those in at least three New Jersey school districts who were caught up in the testing security dragnet. It also won’t say how many students it has snagged in New Jersey.

The company  Caveon “continually patrols the internet looking for inappropriate sharing or discussion,” an executive of the company told Adam Clark, a reporter for New Jersey Advance Media, the platform for stories appearing in a number of media outlets, including the Star-Ledger and its  digital partner, nj.com.

The story generally tries to dismiss the importance of the revelation about Pearson’s monitoring of the social media posts of children, not only in  New Jersey but in a dozen other states requiring students to take the PARCC tests.  Despite the international reaction of  shock and anger to the disclosures, the reporter refers to it as “not new or uncommon.”

Trust me, Mr. Clark, it is new to a lot of people, mostly parents of children who were unaware of it. I have heard from people throughout the world who, unlike you, do not believe it is not new nor uncommon.

But in downplaying the importance of a story it ignored for four days, the outlet—deliberately or not–all but missed a major piece to  the spying puzzle.  Some people–we don’t know who they are or how they were vetted or what their credentials are–is reading countless numbers of transmissions posted by children.

”We use a bunch of different search technology (sic) to cast a really broad and deep net, and then our team, our analysts, spend lots of hours culling through the noise to hone in on what really appears to be a threat,” the reports the Caveon executive, Steve Addison, as saying.

These unknown trolls are making judgments about what they read–and they are reading everything children are posting on Twitter and, possibly, other social media platforms. I hope they are at ;east making minimum wage.

The reporter notes that Caveon alerts its clients to “both obvious and possible” threats. He also quoted both Pearson and Caveon as saying the children whose posts are being scanned have “no expectation of privacy.”

The expectation of privacy is a term of art that is not so simple to define. Because no one–beyond Caveon, Pearson and some state governments–knows how to connect often pseudonymous Twitter handles to actual children, no final judgment can be made. And these folks are not telling.

Full disclosure: Bob Braun’s Ledger asked both Pearson and the state education department–including Michael Yaple, quoted in Clark’s story–for the information that turned up in the New Jersey Advance Media story, but they refused to answer questions. Hoping, one surmises, for better treatment from certain media outlets than others. Interesting partnership among main=stream media, government, and private corporations–not too healthy for a democracy. 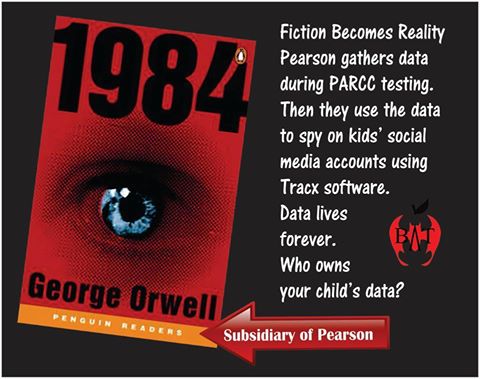 The Assembly Education Committee has scheduled a hearing for 10 a.m. Thursday on the spying revelations. State Education Commissioner David Hespe and representatives from Pearson have been asked to testify, but it is not yet known who will show up.