The state Department of Transportation has ordered work on the trouble-plagued $1.8 billion Pulaski Skyway renovation project to stop because, one of its engineers alleged, a contractor “improperly” dumped concrete waste into Kearny’s municipal sewer system. The state also said it would not pay the contractor until the dumping had been cleaned up and investigations conducted into how it happened were completed.

The main into which waste from the skyway construction site was pumped. Photo by state transportation department. 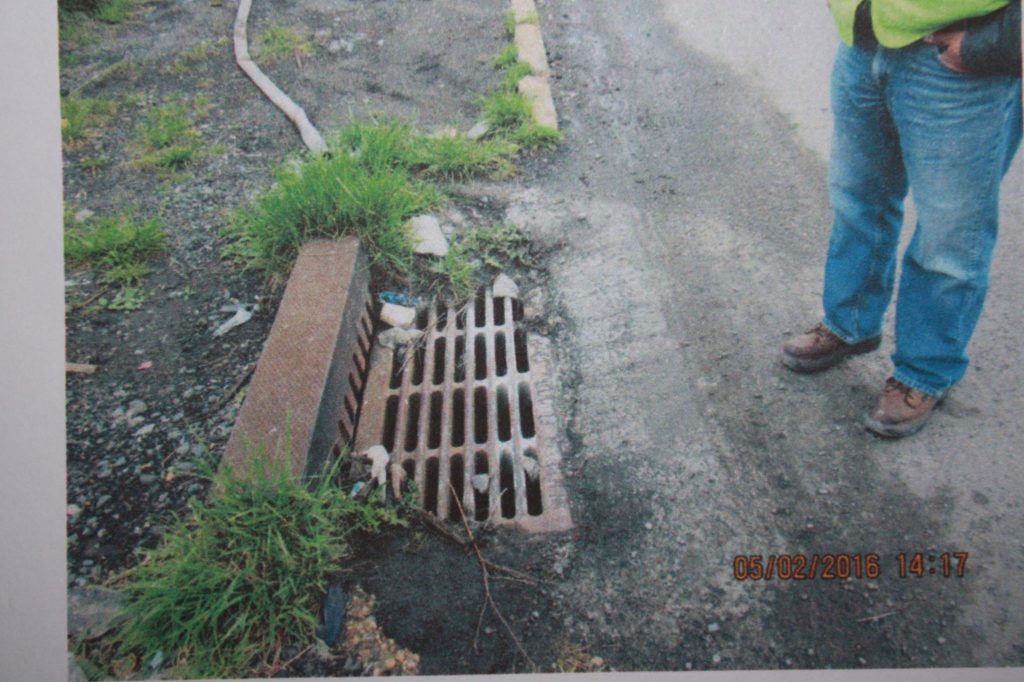 “The improper dumping of cementious materials is a violation of State and Federal laws pertaining to the disposal of concrete waste and will not be tolerated on this project,” wrote David Hawes, a resident engineer on the project, in a letter to a representative of the contractor, China Construction America-Civil (CCA).

Municipal officials in both Newark and Kearny say they were told the state Departmentof Environmental Protection (DEP) also would be investigation the impact of the dumping.
The Pulaski Skyway project is worth $336 million to CCA, according to the company’s website. It is working in a joint venture with the locally owned Daidone Electric and is referred to in transportation department documents as CCA-DE, JV.
Hawes listed the steps the contractor must take and noted, “Until such time that CCA-DE, JV provides the above noted plans and investigations and completes any required remediation, the Department will not make payment for any related contract items that resulted in the generation of his improper disposal.”
The letter is dated May 4 and indicates the improper dumping had been discovered by transportation officials two days earlier—although the letter itself refers to the discovery of the problem on “March 2, 2015.” The letter contains a number of obvious mistakes.
According to Hawes, state officials found “a large in-ground pool of concrete slurry and concrete washout in the contractor’s yard at the base of the Kearny Ramp.” Before the skyway was closed down for rehabilitation, that ramp led from Second Street in Kearny to the elevated highway.
The “in-ground” pool was literally that—in the ground, without a lining of any sort.
“It was also discovered the CCA-DE, JV had placed a submersible pump into southeast corner of this pit and upon further investigation if (sic) was found that this pump was discharging then continents (sic) of the pit into the municipal storm sewer,” Hawes wrote.
The municipal storm sewer eventually opens into Passaic River which runs past a host of municipalities in Essex and Passaic counties.
The letter contains pictures of what the state transportation officials saw, including a discharge pipe empty into a sewer.
The state transportation department was asked how long the stop-work order would last, how much has been withheld from the payments to China Construction America, and whether the latest problem would mean yet another delay in completion of the project. The construction began in April of 2014 and was supposed to be completed two years later. It is now scheduled for completion by the end of this year.
Stephen Schapiro, a spokesman for the transportation department, did not answer questions about how long the work would be stopped or how much has been withheld—but he insisted the discovery of improper dumping would not delay completion of the project.
“Although the Department is withholding payment for any related contract work that resulted in the generation of this improper disposal, work is continuing on the project with proper disposal and this should not affect the project schedule,” Schapiro said.
The project has a controversial political past as well—one related to the Bridgegate scandal that still remains unresolved and helped to sink the political aspirations of Gov. Chris Christie.
While no one doubts the need to rehabilitate the 84-year-old skyway, the method chosen by the Christie Administration to fund it has provoked an investigation by the Securities and Exchange Commission (SEC) into the financial operations of the Port Authority of New York and New Jersey.
Christie persuaded the Port Authority board to pay $1.8 billion for the Pulaski Skyway and other state highway projects because he would not accept increased increased gasoline taxes to replenish the state’s transportation trust fund. The money came from some $3 billion set aside by the interstate agency for a rail tunnel that Christie scrapped.
Lawyers for the Port Authority argued the skyway project was designed as improvement of an access road to the Lincoln Tunnel, one of the interstate crossings owned by the agency. The SEC is trying to determine whether bondholders were misled about the use of the money.