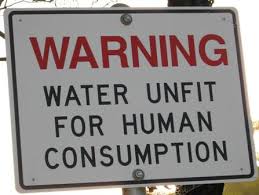 This was reported first by Bob Braun’s Ledger. Thanks to all sources among the residents and employees of Newark. The people of the city care about the city and they let me help:

The drinking water in 30 Newark public schools enrolling tens of thousands of students is not safe, according to state-appointed schools superintendent Christopher Cerf who told principals this morning to use bottled drinking water instead.

There was no immediate indication how long Newark’s school children were drinking from contaminated fountains–for how long their food was prepared in kitchens using lead-tainted water.

“For all we know, we could have been drinking contaminated water for months or even years,” said one staff member who asked not to be identified. “I don’t trust anything Cerf says.”

Newark Mayor Ras Baraka held a new conference in which he told the press, “This is not Flint” and that the contamination problem was limited to public schools. He also asked for private donations of water to the public schools–an extraordinary request for a public official.

The message from Cerf to the principals, however, apparently came after children in the schools were served breakfast. Sources in the schools say that, as of 9 a.m., neither food service workers nor nurses were informed that they should not use the water. Later, signs were posted in school kitchens and near drinking fountains warning against consumption of the lead contaminated water.

Overnight, pallettes of drinking water were delivered to some 30 schools in the state’s largest school district. But the water was  in liter-sized containers that could not be consumed individually by small children. Cerf, said principals on the conference call, told the school administrators to buy paper cups to use to give the water to children. Several principals reported they scoured local neighborhood stores looking for hundreds of paper cups.

“Ever try to buy 500 paper cups from a local grocery store?” asked one school staff member.

Cerf said the water had recently been tested, but gave no details.

Later in the morning, the school district and the state Department of Environmental Protection issued a joint statement:

The joint district/state statement tried to play down the impact of the poisoned water.

It tried to reassure parents that, “The DEP and the State Department of Health are working in partnership with the district in its efforts to resolve the issue. This includes a plan for immediate, coordinated sampling of all points of entry and taps for all public schools in the district, including charters.”

“The Newark Public Schools system has temporarily shut off all drinking water fountains at the schools where elevated levels of lead were recorded. This will remain the case until further tests can be conducted. It is also posting notices in restroom facilities to not drink water from the faucets. Replacement drinking water, from water coolers and bottled water, is available at all impacted schools.

“On Monday, March 7, DEP was notified by Newark Public Schools of the results of recent annual testing. A total of 30 school buildings recorded levels ranging from non-detect to above EPA’s action level for lead, which is 15 parts per billion. The action level represents the threshold requiring additional testing, monitoring and remediation.

“DEP has requested past test results from previous years from the school district to be able to do a complete analysis of the full data set. No building had more than four samples above the action level.

“DEP has confirmed that lead has not been found within the Newark Water Department’s source water. In the vast majority of cases where lead is found in drinking water, it enters through the water delivery system itself when it leaches from either lead pipes, household fixtures containing lead, or lead solder.”

John Abeigon, the president of the Newark Teachers Union (NTU),  sent out a message to union members, encouraging them to “assist” school administrators in ensuring the children remain safe.

In a later statement, Abeigon said, “Yes, we are concerned for our children and well as our members who staff these affected schools. Who allowed children to drink this water and for how long is a serious question that must be answered by Federal authorities. Newark is a state operated school district and as such the state EPA cannot be trusted since they answer to the state’s Governor and not the children of Newark.

“This is a direct result of continuing borderline criminal occupation of the city schools by a state appointed administration that is hell-bent on expanding corporate charter schools even if it means neglecting the safety of children and staff in the traditional schools.. Lead levels are tested regularly and results shared with districts whose administrators are trained to read and respond to the results. What happened here? Who received the results over the last several years and what did they do with them? Apparently, the answer, at least for these 30 schools is—nothing.  And how can we trust the levels at the other buildings?”
In a letter scheduled to go home in children’s backpacks this afternoon, Cerf insisted that, because of the provision of bottled water and the posting of signs warning against drinking,  “the water and food at your child’s school is safe.”

But it was not clear just how long the water was contaminated–and how long Cerf and his state-appointed subordinates knew about the water. The statement from the Department of Environmental Protection said it did not discover the dangerously high levels of lead but its officials were notified of the contamination by the Newark public schools.

Gov. Chris Christie was in Newark Monday, at an appearance in which he warned the Newark mayor, Ras Baraka, that he would “run over him” if the mayor tried to thwart a major expansion of charter schools. Christie also said Bartaka, who is black, has an “attitude” problem. Christie is now vacation in Florida.

The contaminated water is a problem for staff, too. One teacher who is eight months pregnant contacted this site: “I drink the water in the school–and now I don’t know what will happen to my baby.”

Abeigon said water fountains and other sources of water in schools are often equipped with filters that need to be replaced or maintained frequently.

“We all know the state has been cutting back on funds–and maybe this was an example where money was saved,” he said.

Christie recently responded to a plea from Baraka for $36 million to close a budget hole by sending the city $26.7 million in “transition” aid–but all but $2 million went to charter schools. Then Christie followed up by ordering the expansion of charter school enrollments in  the city. It was Baraka’s criticism of that move that led Christie to threaten to “run over” Baraka.

The DEP statement provided this advice to Newark parents:

“Children can be given a blood test to measure the level of lead in their blood. If parents are concerned, they can have their children tested for lead at the Newark Health Department.”

A New Jersey Department of Health fact sheet on lead in drinking water is available at http://www.nj.gov/health/ceohs/documents/dw_lead_factsheet.pdf.

For more information on lead in water, visit: http://www.nj.gov/dep/watersupply/pdf/lead-water-faq.pdf.

For a list of Newark Public Schools’ most recent water sampling results, visit the What’s New area of the DEP’s Division of Water Supply and Geoscience page at: http://www.nj.gov/dep/watersupply/