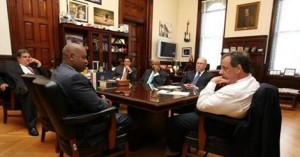 The committee that is supposed to figure out how the state will give up control of the Newark schools after 20 years has scheduled its first public meeting Wednesday night (Sept. 23).  The  “Newark Educational Success Board” (NESB)– established in a deal between Gov. Chris Christie and Newark Mayor Ras Baraka–is supposed to find out what the community  thinks but the committee has only met secretly since its creation  in June. The members of the committee–five appointed by Christie, four appointed by Baraka (with Christie holding a veto over the mayor’s choices)–won’t even say how many times they’ve met secretly because they are under a gag order that forbids its members from making public statements. All questions must be directed to the mayor’s office and the mayor has a major political stake in the perception of its success.

So much for the word “public” in public education. So much for transparency. But that may be the least of its problems.

Early signs are not promising for those favoring, not just a return to local school control, but also a restoration of traditional neighborhood public schools after 20 years of state control and various highly-touted reforms that managed only to drain Newark’s schools of funding on the way to making the city the charter school capital of New Jersey.

Mayor Baraka doesn’t like to talk about how the district is facing mass privatization and he has dismissed the importance of a debate over the future of privately-operated charter schools. Still, it is clear the political clout of charters has been enhanced by the Christie-Baraka deal–while the strength of the pro-neighborhood school forces has been sapped.

Baraka recently toured the city’s neighborhoods, giving away thousands of  backpacks and school supplies, in a publicity event sponsored and paid for by pro-charter, pro-privatization organizations supported by people who sought Baraka’s defeat in last year’s election. That would include Democrats for Education Reform (DFER), headed by Shavar Jeffries. You might remember Jeffries, a proponent of charters, ran against Baraka last year–and got so much money from pro-charter reform groups that Baraka accused his opponents of “a form of money laundering.”

But now Baraka and Jeffries are friends again.

The other groups paying for the political tour included Teach for America (TFA)–those great friends of unionized teachers (a joke, of course).  B4Kids, the pro-charter group run by billionaire hedge-fund manager David Tepper. The Black Alliance for Education Options, funded by the Gates and Walton  foundations. The Newark Charter School Trust Fund. And the Fund for Newark’s Future–the Mark Zuckerberg money.

The Fund for Newark’s Future wouldn’t spend the last of the Mark Zuckerberg money to make up the $25 million deficit the state caused but it will spend money on politics.

It’s almost funny that one pro-charter blogger predicted before the 2014 election that a Baraka victory would actually help charter schools. She was right, albeit for the wrong reasons. She predicted the pro-charter groups, like DFER, would unite against the attacks from Baraka the way the anti-charter groups united against Cami Anderson, the recently fired state-appointed schools superintendent.

The same blogger now has congratulated Baraka for forming a partnership with Christopher Cerf, the business entrepreneur and former state education commissioner who is now schools superintendent in Newark. Next thing, we’ll be holding hands and  singing Kumbaya on a march from City Hall to 2 Cedar Street, school headquarters.

The NESB panel is headed by  Cerf, the man who appointed and now has replaced Anderson. Anderson was fired as part of the Christie/Baraka deal. She was an awful superintendent but she had one great combination of qualities–she was so obnoxious, rude, and insensitive that she unified opposition to state control.

Cerf, author of what became the “One Newark” plan for helping expand charter schools, probably did worse things to Newark children and their parents than Anderson did. And he was a national officer of the National Alliance of Public Charter Schools. But Cerf is a smooth talker while Anderson hardly spoke to anyone.

Cerf runs the NESB. It also includes Donald Katz, CEO of Audible, Inc. and a national champion of charter schools.  Other pro-charter members include Al Koeppe, a sort of utility CEO–Verizon and PSEGCo–who headed a state authority that gave charter schools $125 million in construction funds because Christie wanted it to. At the same time,  Newark’s public neighborhood schools never did get all the construction money promised to it by the state.

So, whatever happens to NESB,  no matter how often it meets and under what circumstances, it’s clear the panel will protect (and undoubtedly expand) charter schools. And every expansion of charters means more money sucked out of the neighborhood schools.  It doesn’t look good for Newark’s neighborhood schools.

Another bad sign:  The Newark Teachers Union (NTU), once among the harshest critics of state control and Cerf, has all but fallen silent. Recently, it wrote an 8-paragraph letter to members using the word “positive” or “productive” four times to describe a meeting with  Cerf, the man who appointed Anderson four years ago and has now replaced her.

A real charmer, that guy.

You might have noticed that, when particularly outrageous examples of “One Newark” or “Turnaround” flaws are given public attention,  Cerf caves in and resolves the problem. He knows how to play the media. The problem, of course, is that most of what he inflicted on Newark parents and children goes unreported–and unhealed.

As long as squeaky wheels get oiled, who cares about those that don’t? But these aren’t wheels. These are children.

Quiet, too, has been the Newark Students Union, the organization that, more than any other, kept  anti-state control sentiment boiling throughout last spring. It got Christie’s attention. The NSU’s walkouts and marches and acts of civil disobedience put the lie to Christie’s efforts to create a political image of himself as an educational reformer and conciliator who could bring warring parties together. Jose Leonardo, the union’s president, is a NESB member.

But the Christie/Baraka deal has saved the presidential wannabe any noisy embarrassment coming out of the streets of Newark that once were lined with portraits depicting Christie as the liar he is.

It’s all quiet in Newark now. And, with Scott Walker gone, Christie can be the candidate of the nation’s union and public school haters.

So quiet in Newark now that organizers for NJ Communities United, the organization that helped guide the Newark Students Union,  have recently turned their attention to Camden. Of course, Camden is suffering from all sorts of neo-liberal reforms imposed by co-governors Christie and George Norcross, the Democratic boss of South Jersey.

But the battle isn’t won in Newark. Far from it. And while anti-privatization organizers are looking south to Camden, pro-privatization groups are springing up in Newark, ready to provide political cover to Baraka and other politicians who might want to  argue that separate and unequal charter versus public systems aren’t so bad after all. One of those groups counts Anderson’s former flack, Matthew Frankel,  a spokesman for reformies in Montclair, as one of its leaders.

Frankel, by the way, is co-founder of the Montclair “reform” group Montclair Kids First that hired Jeffries as its lawyer in a strange campaign against the pro-public school group.  Frankel also is “senior adviser” to Newark’s 350 Anniversary Celebration that is chaired by Junius Williams, the head of the Abbott Leadership Institute.

I hate to be a pessimist but all signs point to a long, painful and ultimately disappointing  road to something that undoubtedly will be celebrated as  “local control”  but is only an empty and bankrupt promise. And, in the time it takes to get there, the Cerfs, the Jeffries’, the Tim Cardens, the Donald Katzes of this world will have plenty of opportunity to establish the dominance of privately-operated, publicly-funded charter schools that will suck money from the traditional neighborhood schools.

It doesn’t look good for Newark’s neighborhood schools. But the future looks great for charter schools. Privatization, it turns out, got rid of its last major obstacle when Anderson was sent back to Glen Ridge or Mars or wherever she lives now. The charter people didn’t like her either but kept her around as protection.

Find out more Wednesday evening at 6 pm when the NESB meets at the Abyssinian Baptist Church in Newark.