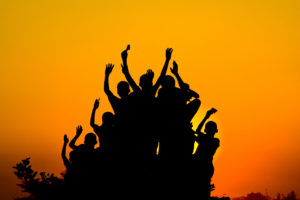 I want to report a case of child abuse.

Thousands of cases. Maybe tens of thousands. One for every child in New Jersey who attended class Monday and Tuesday in near 100 degree heat without air conditioning. Who will still be in school next week when the heat returns–and in September.

And child abuse is a crime.

All these children were entrusted to the care of public managers and officials–from school principals to the New Jersey state education commissioner–who probably didn’t think much about the problem.

Didn’t think of it because they were working in air conditioned offices. They were aided and abetted by legislators who, while ready to spend hundreds of millions of dollars–maybe $750 million– to renovate the Statehouse (which already has air conditioned chambers, committee rooms, and offices), won’t provide the schools with the money they need to air conditioned their classrooms.

The worst aider and abettor, of course, is Chris Christie, the governor who wasted $24 million in 2013 for a special US Senate election designed, in part, to help elect his ally, former Newark mayor Cory Booker. That $24 million could have paid for a lot of air conditioning.

I want to report a case of child abuse.

But I would have to report it to the state. The same state Christie governs, at least on occasion, if badly. But I know the people who work for the  office of Child Protection and Permanency already are aware of what is happening and they haven’t done a thing to help. I can just imagine some brave social worker walking into a public school and, in that air conditioned office, slapping the principal with an abuse charge.

Besides, the definition of child abuse and neglect used by New Jersey doesn’t cover requiring children to sit hours through sickening heat in a classroom that, even if it isn’t technically overcrowded, begins to feel that way in 100 degree heat. Here’s what one teacher said about that:

“A classroom packed with 30 adult-sized teen-agers becomes hotter than the outdoors….How can anyone expect these students to be actively engaged in lessons during those treacherous days with unbearable heat in their classrooms?”

What expectations are is not the threshold question. “Does anyone even think about?” is.

The teacher added she was “furious” with Christie and the legislators who want to spend anywhere from $300 million to $750 million to renovate the Statehouse.

It’s not an exaggeration to say subjecting children to excessive heat is child abuse. We all know about leaving children in cars. Experts on child abuse at the State University of New York (SUNY) tell medical practitioners to count the failure to provide air conditioning as an example of child abuse and neglect.

Those who work for public schools and those who lead them belong to powerful political organizations that spend a lot of time and energy in Trenton lobbying for benefits for their members. That’s their right and responsibility. Yet I’ve always been troubled by the failure of these groups to use their political clout to do what each of them claims to do–advocate for the children.

I know the laws governing collective bargaining limit the scope of negotiations but I wish, for once, the unions and professional associations representing school employees would seek to close down schools that are unsafe and unhealthy because of the lack of air conditioning.

I wish the NJ School Boards Association would tell its members to impose local limits on indoor temperatures. I wish PTA and other parent organizations would organize boycotts.

I wish the media outlets, always so quick to beat their chests about the failure of the public schools and their employees, would recognize children are harmed by excessive heat. And they learn nothing–except, perhaps, they learn they are somehow less worthy than the adults who get to spend their work days in air conditioned comfort.

Typical of mainstream media’s attitude was an editorial in nj.com–the digital parent of The Star-Ledger and other Advance Media newspapers in New Jersey–that argued:

“One “benefit” that does not justify the expense: providing added comfort for students and teachers for two or three days in June, and three or four days in September. “

What inaccuracy–there’s a lot more than a week involved–most of September, most of May and June. It doesn’t have to be over 90 outside for a windowed classroom filled with children and adults to become intolerable. To become a place where learning is not going on.

And what rank hypocrisy. As a nearly 50-year employee of that media organization, I can report our offices were always air-conditioned. On the few occasions I can remember the briefest interruptions of air-conditioning–maybe once or twice–you could hear the howling all the way to McGovern’s. To which many of us would retreat to lament our mistreatment.

Also–please spare me stories about how the lack of air conditioning “toughens” children. So, some sadists would argue, do daily beatings–and would you have the laws against corporal punishment repealed?  (Yeah, I know, some sadists would). Shall we go back in time when children died for want of vaccines–because that might “toughen” the species?

Standards and expectations change. Teachers report children with asthma and other illnesses suffer from exacerbations in oven-like classrooms. It’s flat-out wrong to force children and their teachers to endure intolerable conditions.

Yes, I know there is an organization–headed by Jerell Blakeley–that is pushing for laws alleviating this condition. It includes leaders and members of employee organizations, including the New Jersey Education Association (NJEA), the state’s largest teachers’ union.

But the effort is going nowhere.

Compare that to what the Maryland governor, Larry Hogan (a Republican), did. He forced Baltimore to air-condition its schools or face the loss of construction funds. Ok, it will happen over five years–but at least there’s a plan. At least there’s a governor who cares about kids sweltering in intolerable conditions, especially in the cities.

More than what New Jersey has.

New Jersey children will continue to suffer until one of two things happens. Either the employee organizations will join with parental groups and refuse to force their children to endure intolerable conditions inside public schools–in other words, boycott unhealthy, unsafe, overheated schools.

Or the courts act, finding a safety issue, maybe accepting an equal protection argument. I’m willing to bet the worst conditions are more rampant in the cities where most of the children are poor and black and brown.

The Newark public schools–not only intolerably hot but also where kids can’t drink from the water fountains because the water is contaminated with lead. As one teacher asked, “Are we beginning to see a problem here yet?”

I know of one school–attended by my grandson–where, within the same school, some children have air conditioning while others do not. Even on the same floor.

How is this fair? How do children win this lottery? Or, more accurately, lose?

I’m not hopeful.  Unions don’t strike for air conditioning. Administrators might not even notice the heat. Parents are too afraid to boycott. So, we will see more days when children are abused by the public schools–and grownups do nothing.

And I want to report it.