Bridget Anne Kelly and Bill Baroni, former top aides to New Jersey Gov. Chris Christie and the only two persons to face trial in the 2013 Bridgegate scandal, were sentenced today. Baroni got two years; Kelly, 18 months. They could have received more time in jail. Christie, of course, was never charged and, despite repeated testimony  at trial  that he knew in advance of the plot to close Fort Lee ramps to the George Washington Bridge, he faced no sanction whatsoever.

Innocent as a plump little babe.

Christie and some of his pals were given passes from prosecution by Christie’s successor as United States attorney for New Jersey, Paul Fishman. Why Fishman did not dig deeper into Bridgegate is a question that will undoubtedly go unanswered unless some court somewhere is willing to extend the reach of justice to the bully governor of New Jersey.

But don’t hold your breath. As citizen crusader Bill Brennan–attacked now by the press because he won’t go away–has reminded us, the point of the criminal justice system is neither to produce or reveal corruption. The point too often is to separate out the acceptable prosecutions from those that can be safely ignored–to allow the most powerful to throw the less powerful under the bus.

Whatever the future, it was clear the three-month trial of Kelly and Baroni was never going to reveal what really happened–and was never going to produce anything like justice. We knew that when, on the first day of the trial, an assistant US attorney told the jury to ignore the issue of why some people–Baroni and Kelly, for example–would be prosecuted while others would not be–say, Chris Christie, David Samson and Bill Stepian, for example.

Justice–the abstraction, the ideal, the unreachable star of fairness–would have required everyone involved to be in the dock–or, at least, identified as co-conspirators. All the criminal justice system required was a show trial so the baying hounds of the political opposition and the lethargic press would have a little lean red meat as a soporific.

Yesterday’s sentencing went about as expected. The only sign of even a weak moral pulse was Kelly’s promise that she would not be the “scapegoat” for what others have done.

But, of course, you will be, Ms. Kelly. That was your role.

Still, it was the only statement worth quoting, even if it were three years too late.

At the close of the trial last Halloween, I wrote this about how the Bridgegate scandal, cover-up, and show trial reflected the quality of public life in New Jersey under Christie. Here’s the piece again, should you care to read it.

BRIDGEGATE: At trial’s closing, someone finally takes on the bully named Chris Christie

Critchley, the lawyer for Bridget Anne Kelly,  called Christie a “bully” and a “liar” and a “coward.” Critchley became, for just that brief time, the kid on the playground who finally had enough of the bully and challenged him to a fight–he literally told Christie to “come at me.”

Critchley became, for those two hours, the stand-in for a flaccid press that should have exposed Christie years ago when he was using the media and his office as US Attorney  to eliminate potential political rivals–a press that settled for his approval and for the access to leaks that approval meant.

“He lied, he flat out lied,” Critchley said in court Monday, citing the words of a witness–and then, in the courtroom, the lawyer turned to the professional descendants of Christie who were prosecuting his client and said, words bristling with sarcasm, “The chief federal prosecutor wouldn’t lie, would he?”

Critchley became, but only for a time, the substitute for legislators who bent to Christie’s will by approving without reservation public officials–including top law enforcement figures and even judges–whose behavior raised serious questions. The spokesman for the silent lawyers who have been too afraid to say publicly what they have said privately about Christie both as governor and prosecutor, afraid because it hurt their clients.

“Cowards! Cowards! Cowards!” Critchley literally shouted during his closing argument for Kelly–and while he was then talking about Christie and former Attorney General and assistant US Attorney Kevin O’Dowd and others–he might as well have been screaming at all of those who contributed to making Christie what he was. He could have been talking about Essex County Executive Joe DiVincenzo and Sheriff Armando Fontoura and Union City Mayor Brian Stack–and all the other Democrats who stabbed Barbara Buono in the back in the 2013 election to curry Christie’s favor. 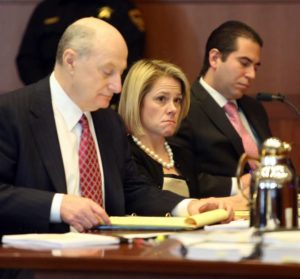 Critchley, for a brief while, spoke for all those who believe people–especially people with power–should treat others with respect. Who should not call  a war veteran a “jerk” and an “idiot.” Who should not encourage reporters to “take a bat” to a woman state senator. Who should not tell a citizen to “sit down and shut up.” Who should not wag his finger at a teacher and tell her, “I’m tired of you people.” Bridget Anne Kelly’s lawyer called out the governor’s potty-mouthed profanity–as when he told Kelly, “No one is entitled to a fucking meeting” and “What do you think I am, a fucking quiz show host?”

Critchley, for those two hours, posted exhibits showing the governor’s involvement with so-called non-profits, including one run by his special friend, Michelle Brown–yes, another of those recruits from the US Attorney’s office, along with O’Dowd and Debbie Gramiccioni, now about to become a judge. Brown’s non-profit–Critchley called it a slush fund–had its own special relationship with South Jersey Industries, the wife of whose owner, Christina Renna, testified against Kelly. Exhibits that showed how so many of the US Attorney’s witnesses were long-time friends and associates of the former US Attorney and still collected paychecks from the state, some from jobs–like that given to Christie’s former mouthpiece and paid apologist, Mike Drewniak–created just for them. Drewniak, the ultimate welfare recipient.

Critchley was the investigative reporter. The vigilant bar association. The principled legislator. The citizen willing to fight back.  The kid who had it with the bully.

Just for a time. Just in one place.

Ah, yes, but there’s the problem and there’s the tragedy:  Whether or not Critchley meant to be a stand-in for failed press scrutiny, for failed legislative oversight, for failed demands for civility from public servants, for failed judgment as to whom should be placed on the state courts–including the state Supreme Court–this is the truth:

Critchley did it for one of Christie’s own.

He did it for a woman who, if things had gone differently, if the George Washington Bridge “traffic study” had not been botched so badly, might be preparing right now to be a special assistant to the president of the United States. She might be thinking of lunches with the most powerful in the nation, not at Café Antonio in Morrisville, PA, but at Marcel’s, down the street from the White House.

There is nothing in the record of the trial to suggest that Bridget Anne Kelly was anything but a loyal, devoted acolyte of Chris Christie long after it was apparent he was a demagogue in waiting, a political tyrant. She testified she shared Christie’s values and policies.

Her downfall came when–for reasons we probably will never know–Christie and his people saw she was too “dangerous,” to use Critchley’s phrase. She  had to be thrown under the bus.

No, this was no Bennett Barlyn, the courageous Hunterdon County prosecutor who sued Christie as a whistle-blower and finally had to settle because righteousness made him broke. This was not even Bill Brennan, the Bergen County activist who wasn’t afraid to file a citizen’s complaint against Christie.

No, Bridget Anne Kelly was a true believer until she wasn’t. Until she faced years in jail. Until she became the most expendable of Christie’s toadies.

She was a minor politician on, as my good friend and commentator Richard Aregood wrote, a “learner’s permit” as an ass  (he used a stronger word) while most of the big guys like Christie and Baroni had licenses for Formula 1 race cars.

Something in me wants the jury to acquit her and let her go home to her four young children who don’t deserve what’s happening to them. Children whose Halloween truly was a horror. Something in me wants Critchley to awaken something in the jury room so a vote for her freedom is cast as a censure of Chris Christie. To find justice with a capital “J,” the justice that equates to fairness and corrects the larger wrongs.

But I know trials don’t work that way. Fairness isn’t the point. US Attorney Paul Fishman took away the chance for true fairness and justice for the people of New Jersey when he declined to indict everyone involved–including Christie and O’Dowd and Bill Stepien and who knows who else –for what happened at the George Washington Bridge in September, 2013.

Mike Critchley did what Fishman should have done: Expose what Kelly called Christie World. The “alternate universe.”

Kelly, Christie’s deputy chief of staff, and Bill Baroni, the man Christie appointed to be the deputy executive director of the Port Authority, got what the law says they deserved–a fair trial.

The law, as Christie so well knows, doesn’t deliver on big issues like justice and fairness and respect.

The jurors will have no way to call Christie a “liar” and a “coward” and a “goon” and a “bully,” even if that’s what they think. They’ll have no way to express their disgust and disappointment at the people and institutions who failed to rid New Jersey of this man and his sleazy behavior. No way to speak for the people versus Christopher J. Christie.

Mike Critchley had to do that for them, too.