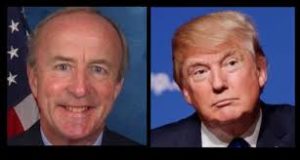 Donald Trump cannot wreck democracy, as my parents used to say, “all by his lonesome.” He needs help and he’s getting it from the Republicans whose legacy once included destroying the careers of those who said nice things about Russians–the same Russians who are now Donald Trump’s pillow-talking bedmates. Trump needs help and he is certainly getting it from some surprising places–like from a nerdy little guy named Rodney Frelinghuysen, the forever Republican congressman from New Jersey’s 11th Congressional district.