A Superior Court judge in Newark is expected to hear arguments today in a labor dispute that has implications for the future of all public employee unions.  Although the case deals only with the Newark Teachers Union (NTU),  the central issue—the so-called “management prerogative” of the state—could affect tens of thousands of other public employees.

After this blog was posted today, Chris Christie’s “Hell Freezes Over” tour (sorry, Eagles), otherwise known as a presidential campaign, hit a new low. The latest IMB/TIPP–for Investor’s Business Daily/TechnoMetrica Marketing Intelligence–poll shows Christie, with one per cent of the vote, tied for ninth place with Mike Huckabee and Rick Santorum (there is no 10th place) in the race to the bottom for the GOP nomination.  In a story published on line by IBD/TIPP, Christie isn’t even mentioned. He, Huckabee and Santorum are called “the rest of the field.” Ouch.

Chris Cuomo is to moderating a presidential debate what his brother Andrew is to running a state. Dreadful.

What was with his fixation on Bernie Sanders’ age–which he got wrong, in any event? First, he asks obtuse questions about the candidate’s athletic prowess as a child, making Sanders  talk about what Cuomo knew were irrelevancies–then the moderator follows it up with the suggestion the obviously healthy Sanders is too old to be president.

Superior Court Judge Donald Kessler has scheduled a hearing next Friday—Jan. 29—on efforts by the Newark Teachers Union (NTU) to block the unilateral decision by the Christie Administration to award the school district’s  prescription benefits program to a politically-connected firm with ties to South Jersey political boss George Norcross III.  The hearing in Newark will come just two days before Benecard Services, awarded the no-bid contract by state-appointed schools superintendent Christopher Cerf, is expected to begin processing claims.

The state administration of Newark’s public schools, after more than 20 years of controlling the state’s largest school system, last night conceded it had failed to solve chronic student absenteeism—and had produced some of the worst student scores on New Jersey’s statewide tests. Even Christopher Cerf, the former state education commissioner and architect of failed reforms in the state-run system, conceded the district faced “a major crisis” in truancy.

Here’s the question now in the Newark schools: Will the charm offensive pressed by Christopher Cerf, the governor’s man running the district, overpower the contractual rights of teachers and other school employee unions? Will Cerf’s sweet-talking to the school board and his road show with the mayor result in a major—perhaps fatal–blow to public employees and their bargaining units?

In a few weeks, voters in Iowa and New Hampshire—in contests with portentous consequences for the nation—will be deciding who they want to be president of the United States. One of those candidates could very well be an unindicted co-conspirator in a federal criminal case. His name is Chris Christie and he is the governor of New Jersey, but the feds won’t tell us whether he is on the secret list of co-conspirators .

Today, Gov. Chris Christie delivered a “State of the State” address, a worse than meaningless media event that serves only his sinking presidential campaign. It will be subjected to equally meaningless punditry laughingly called “analysis” and predictable “he said, she said” comments from state Democrats, most of whom owe their allegiance, if not to the Republican governor, then to the Democratic bosses who sleep regularly–politically, of course–with the governor. Instead, this site will present a counter statement from  Better Choices for New Jersey, a coalition of progressive groups that are generally ignored by the main-stream media. This will be one of the few news sites where these views are given due exposure.

The head of the Newark Teachers Union (NTU), invoking the sacrifices faced  by the union in the past, has called on current members to oppose efforts by the school district’s state managers to make unilateral changes in the school employees’ prescription drug program. John Abeigon’s contention that the unilateral change is a “punch in the face” that must be answered with “action” carries with it the risk union members are simply not up for a fight and will have few political allies in Newark. 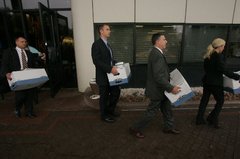 They say it all: Pictures of FBI agents hauling what media outlets in 2009 called “boxes of evidence” away from the home and office of former New Jersey Assembly Speaker Joseph Doria (D-Hudson). The pictures are all anyone—especially Republican voters in New Hampshire—need to know about the personal and professional integrity of presidential candidate Chris Christie. Well, there is one thing more: they need to know those boxes were empty—because the whole raid on Doria’s home and office,  part of a what was termed a “massive crackdown on corruption” was pure theatre, pure fiction, pure lies, pure politics.